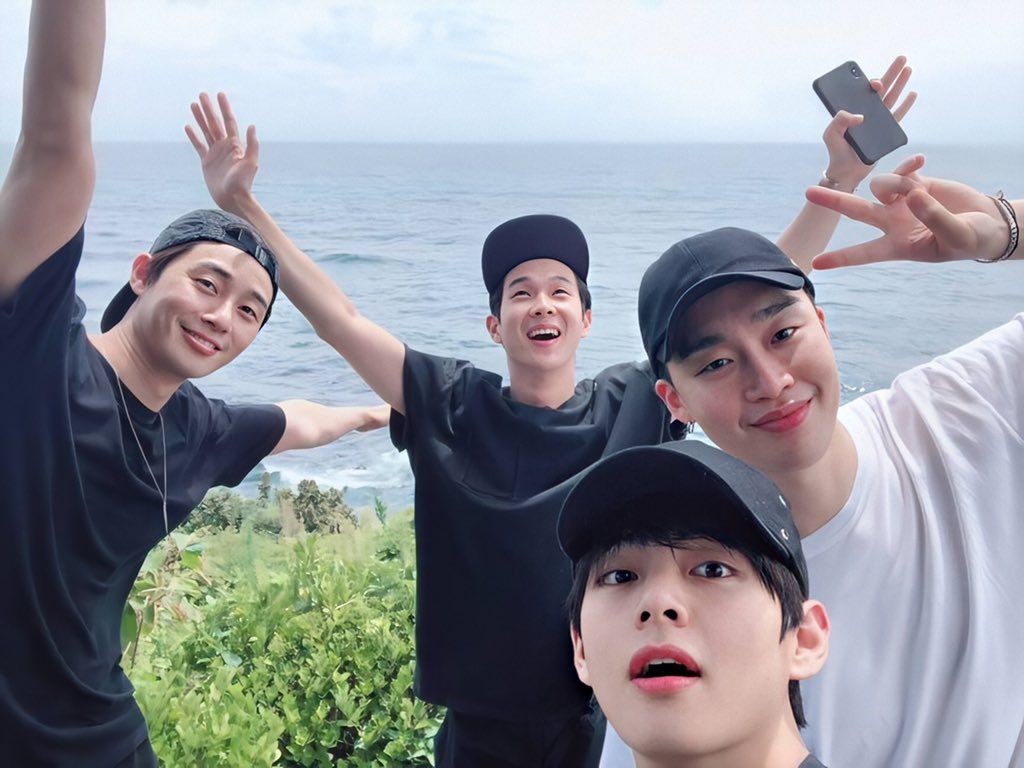 What is Wooga Squad? While it’s highly debatable if Squad Goals are a thing, these 5 men are ready to put a full stop to our debate. The star-studded group of Park Seo Joon, Park Hyung Sik, Choi Woo Shik, Peakboy, and BTS’ V forming the Wooga Squad has definitely stolen millions of hearts. From hanging out during their downtime, sending each other coffee trucks, and spending special occasions together, this group has the solid support system that we all love to see! Wooga stands for “are we family”?

According to speculations, The Wooga stands for “FAMILY”. In one clip, BTS’ V, the group’s maknae (youngest) explains that ‘Wooga’ is an abbreviation for the phrase, ‘Are we family?’ (Woori-ga Gajok-inga?). This couldn’t be more fitting, seeing how these boys are practically bonded like brothers!

In one of the episodes of Summer Vacation, Choi Woo Shik revealed that he basically raised Wooga Squad member Park Seo Joon when they first became friends.

“We appeared together on the program Shut Up Family. I’m his senior by six months. Seo-joon couldn’t even look at me back then. I basically raised him, when he was all flustered and didn’t even know where the cameras were,” Woo-shik recalled via Soompi.

How did the wooga squad start?

They all connected through Park Seo Joon. Coming from very different areas of the entertainment industry, it’s really surprising to see how this group came so far – For that, we have Park Seo Joon, the founding member of the group to thank for.

The Wooga Squad was born after Park Seo Joon formed a tight-knit bond with Park Hyung Sik and BTS’ V on the set of Hwarang: The Poet Warrior Youth back in 2016. Soon after, Park Seo Moon’s longtime friend, rapper Peakboy, joined the group followed by Seo Joon’s Fight For My Way and Oscar Award-winning Parasite co-star, Choi Woo Shik, with whom he had first met in 2012 on the sitcom Shut Up Family—and the rest is history! Their best friend group has been inseparable ever since.

They are each other’s biggest fans:

Even though the boys belong to different spectrums of the entertainment industry, the amount of support they provide to each other is stupendous and overwhelming. They never fail to melt their fans’ hearts. They are each other’s biggest cheerleaders. How could we forget the iconic moment when BTS bagged four Daesangs in the 2019 Melon Music Awards? The night saw two presented by none other than V’s BFFs, Park Seo Joon and Choi Woo Shik! 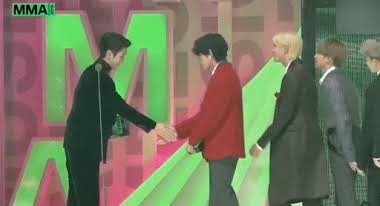 2. When V and Choi Woo Shik and V almost burst out laughing during RM’s speech:

While RM was giving out his meaningful speech after his group had received the “Record of the Year” award at the MMA’s, we could see Choi Woo Shik and V bursting into laughter after making eye contact with each other. 3. When they vacationed together :

Park Seo Joon, Choi Woo Shik, and Peakboy all joined V for fun in the sun during V’s vacation time back in 2019. In his vacation log, V shared clips from his gym time with friends. While Park Seo Joon was lifting, V and the others danced! 5. The time when V photoshopped Park Hyung Sik in his photo:

Since Park Hyung Sik was serving in the military, he couldn’t join V’s vacation fun. Even so, V found a creative way to include him! On July 30, V attended the VIP screening for The Divine Fury, a movie featuring his besties Park Seo Joon and Choi Woo Shik. One of the best things about this friendship circle is that they are big fans of each other’s work. 7. When they came out to support BTS’s concert:

On October 27, V’s friend circle (all except Park Hyung Sik, who was in the military) came out to see Speak Yourself [The Final]. A fan snapped this photo of Park Seo Joon, Peakboy, and Choi Woo Shik at the venue.

In June, V shared photos of the food truck his friends sent him for BTS’s “Magic Shop” Muster. The banner says, “Wooga? Wooga? Taehyung, you know, right? Wooga. – From Your Brothers.” 1. Is BTS jealous of Wooga Squad?

BTS: When V was jealous of Jungkook and scolded Park Seo Joon, Choi Woo Shik from the Wooga Squad to do something for him

It was last year that BTS member V revealed in a tweet that he had “irritated” his Wooga Squad brothers into sending him a personalized coffee and a snack truck as a surprise gift because he was jealous of his teammate at the show. the boyband, Jungkook.

Sending trucks of coffee and snacks between famous friends in Korea is a pretty sweet tradition. It’s a way of showing your support for your friend’s work project to be successful while providing them with delicious snacks to devour and the BTS stars were not far behind.

2. Did Tae ever say that he’s healing when he’s with Wooga Squad and his family so his members asked him “not with us,” but he didn’t answer?

Well, taehyung didn’t exactly say that. They were talking about what they wanted to do in the New year. And he said that he wanted to do partake in activities that would heal his mind. Then jk followed up with “with who?” to which tae replied that he can do plenty of those things on his own. After which jk asked “not with me /us?“ which tae ignored and didn’t reply to.

But later when jin suggested that they go fishing and jhope and yungi said that he should come with them, tae happily agreed. They even made plans.

So it wasn’t that he implied he didn’t wanna go healing with the members. He simply did not reply to jk.

3. What is Wooga Squad according to BTS?

The thing with Wooga Squad is that some Army took it to a level that makes no sense at all. Some said it was a betrayal to BTS and that kind of thing. The relationship between BTS and Wooga is pretty damn normal, and they’re adults and mature enough to understand that all of them have other friends outside BTS.

This is a challenging question but it is more likely that he is closer to BTS. V is known to be a social butterfly therefore he can make friends from the first time he meets someone. In my opinion, it is BTS because he has been with them and his best friend JIMIN is in BTS. V spent has been with BTS since 2013 and has been with the wooga squad when he was working on the kdrama Hwarang in 2015.

5. What is the most common misconception about V from BTS?

That he hates or is tired of or doesn’t care about the members of BTS because he has other friends like the Wooga Squad.

Park Seo Joon and Choi Woo-Shik, who starred in the Oscar-winning film Parasite. This group of friends is a part of Wooga Squad, which also includes Park Hyung Sik and singer Peakboy. Now, talking about this fun gang, they have featured in many Korean reality shows, where they revealed some crazy incidents about each other. And one of them is from 2020’s tvN reality show called Summer Vacation. Soon after enjoying their relaxation mode, Park Seo Joon called V and the latter picked up his call immediately. The duo greeted each other and V asked Park that what he should eat but before replying to the answer, he introduces Choi Woo Shik, who was channelizing his inner singer and strumming the ukulele, crooned about Guava, which makes another duo laughter. Later, V said that his parents should have seen his performance, to which Choi Woo Shik replied he should visit V’s parents soon. And this is when we see V asking him to bring the Kimchi (a Korean dinner) container and everyone burst out laughing. Taking the hilarious ride further, Choi Woo Shik said that this is not the first time when V reminded him of the container.

8. What message did V send to Park Seo Joon?

Actor Park Seo Joon recently held an online fan meeting to celebrate his 10th debut anniversary as an actor. Through this fan meeting, he was able to express his gratitude and love for the fans who have been with him throughout his career. In particular, many other celebrities also recorded video messages to congratulate Park Seo Joon’s special day.

But the most noticeable is the handsome V BTS, who is known to be Park Seo Joon’s close friend in the Wooga Squad brothers, who also recorded a message sent to his best friend’s fan meeting. “Hi, I’m a friend of Park Seo Joon, V BTS. I heard that he prepared a lot for this meeting. Don’t worry too much and I hope you will have precious memories. Hope you have a great meeting. Fighting!”.

9. What is the meaning of Wooga?

In a recent interview, BTS V, the youngest Wooga Squad member let fans in on the mystery and said that Wooga stood for the abbreviation of Are we family? (‘Woori-ga Gajok-inka?‘) which is far more meaningful and fitting with its members’ personalities.

10. What does BTS’s Jin think of V as a wooga squad member?

On December 4, Jin rang on his 28th birthday (by international reckoning), and he held a special Naver V Live broadcast to celebrate the occasion with his fans. Early on in the broadcast, he mentioned that he had received a text message from V just before going live, and he called his bandmate for a brief chat.

During their phone conversation, Jin mysteriously told V, “Wow, you’re really the best,” when asked if he could tell the fans the “moving story” of what V had done for him. Although V seemingly protested, Jin declared, “No, but I need to tell this story. Thank you, thank you.”

After hanging up, Jin explained, “Our Taehyung [V’s given name] is so incredibly kind. Last night, work wrapped up late, so I was really tired and needed to sleep. But just in case, I stayed up until 1 in the morning, thinking that people might send me birthday wishes [at midnight]. So just in case, I stayed up until 1 a.m.” Jin went on to explain that thanks to his bandmate’s efforts, he had received birthday wishes from many of V’s celebrity friends, including actor Park Seo Joon. “So some of the people Taehyung hangs out with, like [Park] Seo Joon, sent me video messages,” said Jin. “There were many of them, about seven or eight, and I wish I could name all of them now—but there were a couple of people I didn’t recognize, and I don’t want to be rude, so I can’t list them all.”. Jin personally really likes Wooga Squad.