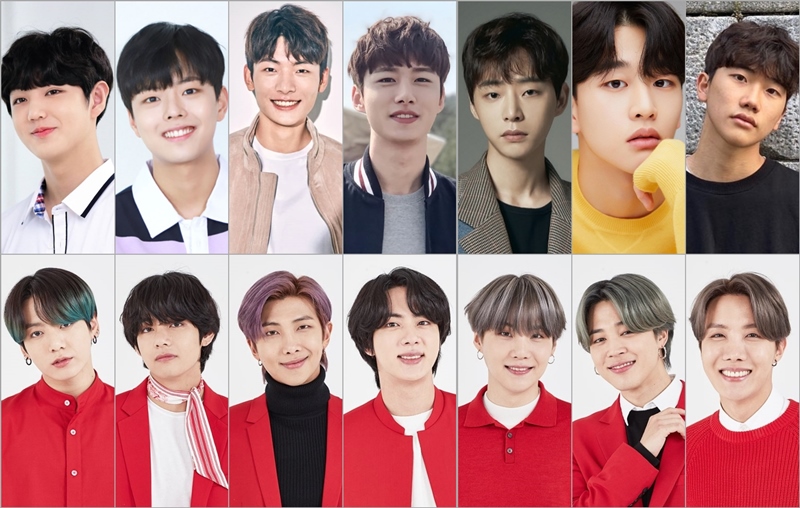 BTS members have proven their versatility as actors in the BTS world game, in this article, we re-imagine some of our favorite K-drama leading men with BTS members in them.

As we all know that BTS is a group of 7 members who are multi-talented Vocalists, Rappers, Performers, Idol, Ambassadors. ARMY is aware of BTS member’s numerous talents and is in the awe of the way can seven guys accommodate so many skills in themselves. However, there is one field in which the BTS members have an abundance of talent, but not enough experience, which is in acting.

We all have seen the acting skills of all the members in RUN BTS where they whilst goofing around. We noticed a spark inside the BTS WORLD GAME in which BTS individuals performed diverse roles in an exchange Bangtan Universe. ARMYs were left stunned and shocked with BTS’s amazing acting talent which left us to reimagine them in K-Drama leading men. Read on to find out.

The series received widespread acclaim from the audience and critics alike for its story and performances.

Namjoon the leader of BTS played the role of a detective in the BTS world game, and honestly if we have to consider that he will make a perfect match for the role of the detective. In signal I would like to cast him as park hae young (Lee Je-hoon) who solves a kidnapping case that ended up with a falsely accused who apparently disappeared after the crime, with a mysterious walkie-talkie he picks up. The success of this case triggers the formation of a long-term cold case team. Park Hae-young who is the leading character who solves other cold cases that have remained unsolved for years will be a perfect match as Namjoon’s intellect and sharp sense of understanding.

MR QUEEN is a 2020 – 2021 south Korean television series that aired on tvN starring Shin-Hye-Sun and Kim Jung- Hyun as the 25th king and queen of the Joseon dynasty. Based on the Chinese web drama Go Princess Go, the series is about a man named Bong-Hwan from the modern age, being trapped in the body of queen Cherion in the Joseon era.

Sageuk drama would be a perfect fit for our worldwide handsome Jin! I would like to cast him as the reigning monarch, King Cheoljong who is a gentle and easy-going person, much like Jin. However, King Cheoljong has a dark and mysterious side to him, and knowing Jin’s effortless acting talent, he will pull it off like a pro! However, he is the only king in his name.

The historical fantasy drama is related to the novel of the same name written by Jung Eun – gowl. It tells of a secret, poignant love story between a fictional king of the Joseon Dynasty and a female shaman against the backdrop of a Korean traditional palace;

As we all witnessed yoongi who played the toughest role of a power-hungry king in his blockbuster music video, DAECHWITA made me realize he will be the perfect cast of King Lee Hwon as suga has the perfect qualities to be a ruling monarch who is kind and intelligent devoted to his one true love Yeon – Woo. The Queen Mother seeks to promote Bo-Kyung, the daughter of the Prime Minister and her blood relative, to be the Crown Princess in order to maintain her clan’s power. However, the King is impressed by Yeon-Woo’s intelligence and chooses her to be Crown Prince Lee Hwon’s wife over Bo-Kyung, infuriating the Queen Mother and Prime Minister Yoon.

The queen’s mother secretly orders to Nok-Yeong to cast a deadly curse on Yeon-Woo after she is diagnosed with an unidentifiable illness.

When the camellia blooms are the story of Oh Dong-Baek, a single mother who moves to the fictional town of Ongsan and opens a bar named Camellia. Six years later, Dong-Baek meets playful Yong-Sik who declares his love for her.

Hobi’s personal favorite drama I believe him to be the fittest candidate for Yong-Sik. Yong-Sik is a principled police officer who vows to protect his love Oh Dong-baek. Mature, self-assured, and confident, Hobi can play the role with perfection just like he takes up his role in Bnagtan.

Navillera is 2021 South Korean television series starring Park In-hwan, Song Kang, Na moon-hee, and Hong Seun-hee. Navillera tells the story of Shim Deok-Chul (Park In-hwan), a 70-year-old retired mailman who decides to pursue his life-long dream of learning ballet, which does not please his family. At the dance academy, he meets Lee Chae-rok (Song Kang), a 23-year-old dancer who became interested in ballet after trying out different sports — his mother was a ballet dancer before she died of the disease when he was young. He is struggling financially and thinks of giving up ballet until meeting Deok-Chul, which changes his mind.

It is no doubt that Jimin is one of the finest dancers in the K-pop industry and possesses natural grace and I believe he will be the perfect match for the role.

I believe Taehyung has already impressed the audience with his short and sweet role as hunsung in Hwarang. This time I would like to see him in a full-fledged role.

Strong Girl Bong Soon is a 2017 television series starring Park Bo-Young which aired on JTBC. Do Bong-soon (Park Bo-young) was born with superhuman strength, her strength is hereditary and passed along only to the woman in her family. Her dream is to create a video game with herself as the main character. In Guk-doo (Ji soo) a police officer. Thanks to her strength she gets a job as a bodyguard to a rich heir Ahn Min-hyuk, the CEO of a gaming company.

Taehyung would be perfect for the role of Ahn Min-hyuk who is a funny character in the drama. He is the CEO of a gaming company unlike other CEOs isn’t stiff and unapproachable, he is rather funny, intelligent, and endearing. Also, the cute nature is another factor he will nail.

18 Again is a South Korean television series based on a film of 2009 starring Kim Ha-neul, Yoon Sang-Hyun, and Lee Do-Hyun, it aired on JTBC.

Jung Da-Jung (Kim Ha-neul) and Hong Dae-young (Yoon Sang-Hyun) are married and have a set of fraternal twins, Hong Shi-ah (Roh Jeong-eui) and Hong Shi-woo (Ryeoun [ko]). At first, they have a perfectly happy marriage despite having children at a very young age and having financial problems. Years later, their happy marriage starts crumbling when 37-year-old Da-Jung files for divorce and their 18-year-old twins start ignoring Dae-young, except for pocket money. Furthermore, Dae-young’s life turns more miserable when he loses his job after his boss promotes his nephew who has worked in the company for only 4 years while relocating Dae-young to Busan.

Lee Do Hyun essays the more youthful model of the character, who’s an aspiring basketball champ! He is athletic, compassionate, and driven, very just like Jungkook. I consider Jungkook has the expertise and desirability to play this type of complicated and heartfelt role.

1 thought on “K-drama with BTS members”