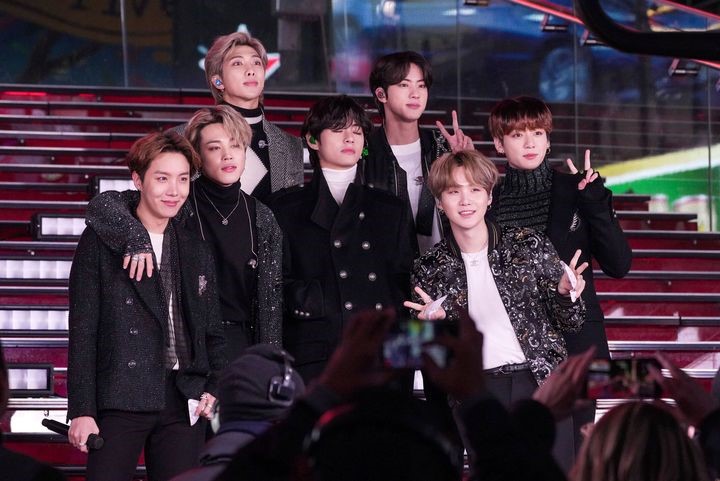 Bangtan Sonyeondan, aka BTS, aka Bangtan Boys, this is the name of the biggest and one of the most loved boy band in the world that doesn’t need any introduction. BTS band is one of the most popular bands among the K-Pop and the English music genre in the entire world.

Who are the BTS Members

RM is the band’s first member and its leader. RM joined Big Hit Entertainment at age 16. He is also a member of the group which speaks English comfortably. He thanked the popular sitcom “Friends” for making his English better.

Jin is the group’s oldest member and often mentors the others. Jin joined Bangtan Boys in 2013 and debuted as one of the vocalists of the group. He is very funny and you can see that in the Run BTS show in which the group does a lot of challenges. Jin also keeps on doing a lot of donations which include donations to UNICEF Korea, KARA (Korea Animal Rights Advocates), and many more.

Min Yoon-gi aka Suga debuted as a member of the band BTS in 2013. Suga joined BTS as a music producer and trained for three years under Big Hit Entertainment along with RM and J-Hope. Suga is a rapper and has written and produced a variety of tracks for many BTS albums. Suga also talked about the issue of mental health and its rising cases in young people. Like RM and J-hope, Suga also has a career as a solo artist.

J-hope debuted as a member of BTS in 2013. Before joining BTS, J-hope was part of the dance crew Neuron. J-hope is also the lead dancer of the band and also a frequent choreographer for the Bangtan Boys. He was the third member joining the group after RM and Suga. J-hope also donates a lot of money for children who need help. Since 2018 he has been a member of the “Green Noble Club”, which recognizes high-value donors of the Child Fund in Korea.

Jimin is the cutest member of the group. He is the lead vocalist and the dancer of the band. Jimin became the first Bangtan member to have a music video achieve 100 million views on youtube, the name of the song is “Serendipity”. Jimin recently donated a huge amount of money for the polio awareness program.

Kim Tae-Hyung aka V aka the most handsome man in the world in 2021 is one of the most loved members of the BTS by the army. V always steals the show with his looks. The famous phrase “I Purple You” was coined by V at a fan meeting in 2016. Since then Purple becomes the symbol of love for BTS and the army.

Jungkook is the youngest member and the vocalist of the K-pop band BTS. He is sometimes called “the golden child.” He wants to become a badminton player when he was young, but when he listened to G-Dragon’s songs he changed his dreams to become a singer.

How does BTS grow?

In 2015, BTS extended their “Red Bullet” tour around the world and was performing sold-out arena shows by the following year. BTS became the first Korean group to win a Billboard Music Award in 2017. In the same year of 2017, BTS made its US performance debut at the American Music Awards. RM discussed in an interview that “Suga literally cried when he took a shower before the day of the performance.” The band also adopted an English name: “Beyond The Science.” Till now BTS has had a total of 22 chart-topping singles in the US, which includes eight top ten hits, including 5 No. 1 songs.

BTS made history with their first English song “Dynamite” as it was the first K-pop song to debut as the No. 1 song on the US Billboard Hot 100 chart, and after that BTS has added a lot of members to the army. Though it was a challenge for them to sing a full song in English, they accepted the challenge for the army and the results showed all the love they got for their hard work.

BTS not only entertains the army but BTS is credited with adding $5 billion a year to the Korean economy also. Because of their extraordinary work and the love they get, on October 25, 2018, all the BTS members were ordained with the fifth-class Hwagwan Order of Cultural Merit by the President of South Korea. In July 2021, they were appointed Special Presidential Envoy for Future Generations and Culture by President Moon Jae-in, to help “lead the global agenda for future generations, such as sustainable growth” and “expand South Korea’s diplomatic efforts and global standing” in the international community.

What is BTS Army

One of the biggest reasons that made BTS successful is its devoted fan base, which is collectively known as the “army.” Along with BTS, the army also spreads positivity around the social platforms and shows love to their favorite band. BTS cherishes its genuine and lovable connection with the army and celebrates the birthday of the army on July 9 every year. As a birthday present on July 9th, 2021 BTS released “Butter.” They released the song Butter to cheer everyone in the hard times of the Covid.

The single Butter broke records and became the longest-running No. 1 debut in history. Following the record-breaking single they released another single named “Permission to Dance.”

When it comes to social deeds BTS is not behind to help. In 2018, they partnered with UNICEF to promote the “Love Myself” campaign around the world to promote anti-violence. “We started LOVE MYSELF as a way to reach young people and help improve their lives and rights”, said BTS, in a press release. “During the process, we also strove to ‘LOVE MYSELF’ ourselves, and we as a team and as individuals grew as well. We hope that many people felt how the love received from others can become the power that allows them to love themselves”, they added.

BTS was nominated for the Grammys in 2019 and also performed in Saturday Night Live (SNL). They became the fourth most successful group on the top Billboard 200 artists list. BTS always regrets that they always had a distance with the army. During the Covid Pandemic in 2020 BTS moved their sold-out world tour “Map of The Soul” online.

BTS’s recent collaboration with Coldplay “My Universe” also grabs the No. 1 spot at the Billboard Hot 100 and becomes their 6th consecutive song to do so. They are the second band to do so after the legendary “The Beatles.” BTS also announced its first live concert since the global pandemic in Los Angeles.

With all the love and fame they are getting now they said in an interview with Vanity Fair that “they are scared of their future, thinking about how big they will become in the future.” We hope that BTS will become the biggest band in the world and they will entertain us like that our whole life, and they will forever appreciate their bond with us the army.

We Purple You BTS.

1. Does BTS have a female member?

No, BTS does not have a female member.

2. Does BTS sing in English?

Yes, BTS started singing in English and their first English song was Dynamite.