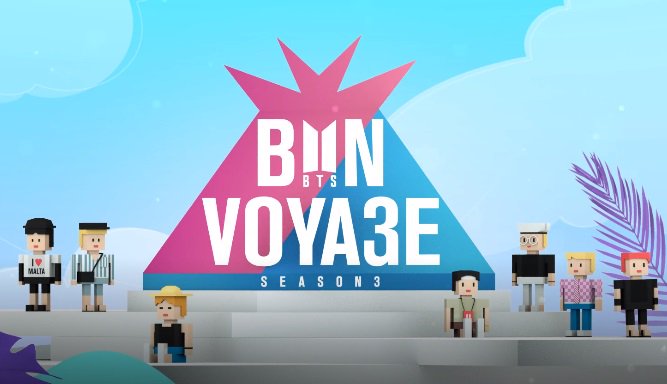 Bon Voyage is a reality show by the most famous South Korean boy band BTS. This reality features the members of BTS traveling around the world. It shows them in day-to-day situations how they handle and live their life as a traveler. This show gives us an insight into each of the members of the group.  In Bon Voyage, we see the members traveling to different countries and trying new activities while spending more time together, away from just making music and going on world tours.

The series runs from November 19, 2019, through January 7, 2020, and consists of eight episodes total showing the adventure and their lifestyle.

In Bon Voyage Season 1, we see the boys traveling to Northern Europe and visiting different locations like Bergen and Finland. They went for cruise rides and tried their hand at camping plus visited Santa Claus Village and wrote Christmas letters to the other members. This season showed how important and close they were to each other. Moreover, They lost their stuff altogether, at least more than 5 times. Jimin left his luggage 3 times. J-Hope lost his tickets somewhere but a local notice hid J-hope face and asked if he lost tickets, therefore finding it. BTS’s V lost himself got lost when the crew went to find him, he was still moving around, making it a lot harder for the crew to find him. Suga is the one who controls the finance in Bon Voyage Season 1 . There’s a lot of fun moments that will make you laugh and will entertain you and make you realize that all the members of the BTS group’s greatest strength lie in the friendship shared between the members.

In Bon Voyage Season 2, BTS went to the tropical islands and it was a wish come true for many of the members of the group. This time they divided themselves into small groups and tried to explore their individuality and compatibility with one another. For example, when RM was teamed with Jin, it was noticed that the two were having candid conversations on life and it was also during this sequence that Namjoon’s famous made his words, “Please use me, please use BTS to love yourself.” were inspired by as Jin had said something to say along with those same lines. However, the most heartwarming moment that brought tears to the eyes of ARMY were the letters that they wrote to each member, especially with V’s emotional letter to bestie Jimin, while they were chilling on a yacht, that is the most memorable.

In Bon Voyage Season 3, the boys went to the hot, hot city of Malta, where the boys again divided themselves into friendship groups to travel around and explore the gorgeous local places, which have a lot of historical and moral value. Moreover, it was shown that Jungkook and V tried their hand at busking as they were singing Lost Stars by Adam Levine and Sunday Morning by Maroon 5, respectively. We also see the members were showing off their playful side by trying water sports. Continuing with the tradition of writing letters, this time the members wrote and expressed words for themselves while Suga had to, unfortunately, leave the trip midway and head back to Korea due to a family emergency. The trip ended with a special dinner, literally hanging from the sky, as they read their letters for the other members to admire.

In Bon Voyage Season 4, the boys get to enjoy the winter season as they arrive in New Zealand and decided to spend their days camping and cooking for themselves. While RM was incredibly stressed with work loaded for the then-tobe released, Map of the Soul: 7, it shows how the members help make him feel better throughout the trip and were very encouraging towards each other. From doing minimal work like grocery shopping to visiting the glaciers and enjoying the snow season, we see the boys enjoying and valuing the good time and enjoying every minute in each other’s presence.

What is bon voyage?

Bon Voyage is a reality show by the most famous South Korean boy group BTS. This reality features the members of BTS traveling around the world.

Does BTS have its own TV show?

Yes BTS have their own Tv show known as Bon Voyage.

After season 4 of bon voyage ended everyone was waiting for the boys to come up with season 5 but 2020 came and they weren’t able to have season 5.

When did BTS go to Dubai?

How many episodes are in BTS Bon Voyage Season 1?

There are a total of 8 episodes in season 1

Where did BTS visit in NZ?

The boys went to Lake Tekapo, which is located in the middle of the South Island of New Zealand.

BTS can’t take pictures with fans because it will create jealously with the fans living in the other area or international area. The fans who will not be able to take pictures with BTS will spread rumors and bad things about the boys.

Why did Jin take a separate flight to New Zealand?

Once they finished the packing of their stuff they headed towards the airport where Jin faced a lot of problems because of some travel documents so he had to take a separate flight to New Zealand.

What year did BTS go to Hawaii?

What is the IMDb rating of Bon voyage?

The IMDb rating of Bon Voyage is 9.6 which is very high because the show imprints love and happiness on the hearts of the BTS fans.

In which season did the boys first write letters?

The boys wrote letters for each other in season 2 which was so heartwarming to see.

Did BTS continue to write letters in the coming seasons?

Yes, they continued the tradition of writing letters, and this time in season 3 of bon voyage they wrote letters for themselves.

How did fans react after seeing this Tv show?

The fans were really happy and enjoyed every bit of the second it was funny, heartwarming and showed love and importance for people in our lives.